I find the week after a holiday to be the most disrupted. I cannot figure out what it is about that one extra day of “free time”, but the four that follow are so disjointed that it’s hard to fall back into our well managed routines. And it’s not just me, my daughter is the same way. I find it even throws off her sleeping schedule – which throws off all life as we know it.

Last month we celebrated our lovely Canadian holiday the same way we always do; We headed stateside and shopped our faces off. We love America, the food, the people, their Olive Garden… I hope that doesn’t make me sound unpatriotic, it’s just one of my favourite places to go and having a long weekend gives us the freedom to go and relax.

While visiting some quaint shops in downtown Port Huron, my girl found some neat things she wanted to have. As usual, I eyed these homemade gifts with a critical eye and told her I can make them for her myself at home – and in her oh-so-charming, 9 year old way she pointed out that just because I can doesn’t mean I’ll ever have the time. That’s ridiculous. Of course I make her things. The kid is super spoiled – but there are things she has asked me for lately that I’ve back burner’d in favour of gardening or reading a late night novel. So the week after, since our routine was blown to bits anyway, I decided to spend a lot of time in my sewing room.

The projects that week included some things I’ve put off from around the house. Like a new cover for my kitchen tv and reupholstering our outdoor furniture. I also found a really cute pattern for an owl bag – except they wanted $9 for the pattern, and as usual I stared at it critically and thought “I can just make that myself”. Sigh. It’s a curse. Had I just bought the pattern I would have had the bag finished in an evening. Having decided to go it alone though, I had to draw out a pattern first, then figure out where and how I wanted my interfacing, where and how I wanted the straps to line in, etc. Trying to do all that while Milly’s cat laid on my craft table batting at my pencil was torture. And that cat didn’t stop. All. Night.

And since I mention it was all night, it was about 1am before I realized I’d sewn the lining backwards and made it half the size it needed to be. Obviously it was time for bed.

The next day I tackled the bag more refreshed and the rest of it came together in no time. She loves it, and uses it constantly, which is all the reward I need for my efforts :). It’s a bit of a random closer, but I am just SO thankful for my mother, who taught me to sew and set the example of  motherhood for me! 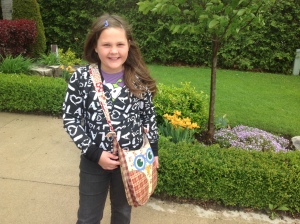 I use food to show love, I make things because it helps me connect to my inner self, and I use social media because it's how I connect to other like-minded people. My life happens between the kitchen, the craft room and the gardens. This blog is where I keep track, work it out, and share my ideas. Feel free to share your thoughts back with me! View more posts